A Functional Link to the Past
Aesthetics are typically a top priority in every landscape design. When the designer can enhance the appearance of a space while providing functionality, the project is an even greater success.

Incorporating historically styled luminaires into a streetscape design can help create a certain ambience while complementing the architecture of surrounding structures. Many designers are using historically styled lighting as a design element in public spaces while supplying the illumination needed to create a safe and secure environment after dark.

Combining Old and New
The diversity of fixtures available gives designers the option to replicate almost any period of time or complement any architectural style. Although acorn-shaped luminaires have proven popular because of their classic styling, designers are discovering the octagonal shapes of the 1920s, the simplistic lines reminiscent of the Colonial period, and the sentimental spheres reflecting early European influences lend daytime appeal to a landscape while providing beauty and functionality at night.

Designers may incorporate almost any embellishment to give a custom look to the lighting system—from decorative caps and finials to medallions, ribs and ornamental bands. Many manufacturers also offer a full line of decorative poles, available in various heights to match the scale of surrounding buildings. Options such as banner arms, flag pole holders, custom logos and signage allow designers to adapt the pole to the specific needs of the application or geographic location.

Although many historically styled lighting systems replicate early era luminaires in appearance, they are state-of-the-art as far as their technology is concerned. Modern optical systems place the light where it is needed to promote uniformity and visual comfort while minimizing light trespass. Permanent materials assure efficiency and long-term performance.

Below are examples of how historically styled luminaires were employed to enhance the appearance of an area while meeting certain lighting challenges.

Turning Back the Clock
The city of Milwaukee wanted to remind residents of simpler days when it renovated its downtown district along Wisconsin Avenue—the main thoroughfare and one of the city’s oldest sections. The area, which is steeped in history, blends a variety of architectural styles. Many of the buildings have brick facades and house both businesses and residences.

In the past, the downtown had little pedestrian traffic after dark. City officials felt that improved illumination would help to encourage residents, visitors and others to venture into the area.

The renovation included removing the modern-looking canister-type lighting fixtures that been installed during the 1970s and replacing them with Milwaukee Harp luminaires from Holophane. The Harp luminaire is harp-shaped with a main body piece and refractor held together by two arms, which allows the luminaire to be mounted like a post top fixture.

“We wanted the lighting fixtures to be authentic—to represent what Milwaukee had been in the past,” said Bryson. “The Milwaukee Harp luminaires are based on the original fixture design with updated, state-of-the art optics.”

The luminaires utilize either 100 or 150-watt high-pressure sodium lamps to create a soft, warm glow suggestive of the gas streetlights used at the start of the twentieth century. They are mounted on black octafluted 15-foot steel posts placed in the concrete walkway two to three feet behind the curb. During the renovation, the city installed planters with trees and a variety of annuals and perennials to add color during the summer months.

Luminaire spacing ranges from 60 to 90 feet, which eliminated any concerns about creating a “forest of poles” effect along the avenue. Even though the luminaires are mounted at 15 feet, the light center is at 17 feet, resulting in a wider light distribution pattern.

Illumination levels are 2 footcandles maintained, which exceeds the Illuminating Engineering Society (IES) standards for this type of environment and fosters a feeling of daylight. Positive vertical illumination helps pedestrians discern detail; they can identify the features of other people on the street and easily read store logos and street signage.

During the renovation, the city faced an installation challenge in the form of hollow sidewalks. A collection of utility tunnels and older building basements that extend beneath the walkways meant the sidewalks could not support the weight of new concrete bases. Installing high leel poles was not an option.

“The Milwaukee Harp luminaires allowed us to adequately illuminate the street using lower poles,” said Bryson. “In most instances, we were able to install the lighting fixtures on existing bolt circles using the same wiring, which significantly reduced installation costs.”

The harp-shaped fixtures with 150-watt HPS lamps were also installed around the Shops at Grand Avenue. Luminaires are spaced 40 to 45 feet, with illumination levels at 3.6 footcandles maintained.

“The lighting system is helping us turn Wisconsin Avenue into a primary pedestrian corridor,” said Bryson. “Since the renovation, we have seen a surge in the number of businesses and housing projects moving to the area.”

Replicating the '40s
Henderson, Kentucky is located in scenic western Kentucky, overlooking the greenish waters of the Ohio River. During the heyday of cotton, Henderson was the richest per capita town in the country, which resulted in a legacy of nineteenth century architecture. Today, Henderson’s downtown area—known as the Commercial Historic District—offers shoppers a variety of stores and merchandise, with everything from books and antiques to clothing, furniture and jewelry. Recently, city officials applied for and received a grant through Governor Paul Patton’s Renaissance Kentucky program to revitalize this area. Officials hoped to transform the downtown into more of an entertainment district with new shops, restaurants and a concert series.

The project involved upgrading sidewalks, redesigning the accessibility ramps for the handicapped and replacing the existing cobrahead lighting system. The city had the option of installing either modern-looking light fixtures or a historically styled system. If the latter was chosen, the luminaires had to replicate lighting fixtures that were actually used to illuminate Henderson’s streets at some time in the past. While looking through old pictures, Julie Martin, executive director for the Downtown Henderson Project, discovered acorn-shaped luminaires with a replica chimney, ornamental crowns and decorative ribs that illuminated downtown Henderson during the 1940s. Martin began researching the lighting systems available by travelling to various cities throughout the country to examine the systems they had installed.

“Early on we decided to use luminaires with a glass globe,” said Martin. “Even though we realized the glass would cost more initially, we felt that we would be happier with the appearance of the luminaires and their performance over time. The glass is brighter and cleaner and will not yellow like acrylic.”

City officials selected Madeira luminaires from Holophane with 175-watt super metal halide lamps. To assure the fixtures closely matched those used by Henderson decades earlier, Martin submitted a number of photographs to Holophane for the design engineers to study.

Since Renaissance Kentucky was funding the project, the luminaires had to be approved by the Kentucky Heritage Council. Gaining this approval was not a problem.

“The Madeira luminaires are almost identical to the units used during the 1940s,” said Martin. “Because of their historical styling, they complement the area buildings, which were constructed during the late 1890s and early 1900s. Many of the building facades are limestone, brick or terra-cotta.”

A total of 173 luminaires were installed along First, Second, Main and Elm Streets and in Audubon Park, which borders the river. Besides the lighting, the renovation included the installation of muted, multi-color concrete pavers. The lighting fixtures and poles were installed in the pavers about two feet from the curb.

Most of the illumination from the Madeira units is directed downward, although a subtle uplight component and vertical illumination create an open visual environment. One of the challenges in designing the lighting was to prevent light trespass into the windows of the second-story apartments along the streets.

“Because we have a pedestrian downtown, we wanted to provide plenty of illumination for people on the sidewalks,” said Martin. “Yet, we did not want the light to be so bright that it would interfere with residents’ ability to sleep. This was especially important since the light fixtures are installed at about the same level as the second floor apartments.”

The luminaires are spaced approximately 62 feet on center. The units include banner arms with an eyebook at the bottom that allows the city to display triangular-shaped banners promoting concerts, festivals and other events throughout the year. Electrical outlets at the top of each fixture are used to plug in Christmas lights.

“The luminaires are beautiful and provide us with a certain amount of flexibility,” said Martin. “We have heard nothing but praise concerning the lighting from everyone—including visitors. Merchants are saying it’s the best thing to happen to the downtown in a long time.”

Lighting a Historic Landmark
The Old State Capitol in Frankfort, Kentucky reflects many architectural elements of the early South with its Greek Revival architecture and sweeping colonnade. Serving as the capital of the Commonwealth of Kentucky from 1830 until 1910, the building is a masterpiece of nineteenth century American architecture.

After the Capitol building underwent an extensive restoration to return it to its original splendor, state officials turned their attention to improving the exterior illumination of this national historic landmark. The facility was previously illuminated with colonial-style luminaires with five-foot heads mounted on eight-foot poles. The aging oversized heads tended to let in the elements, which caused lamps and ballasts to fail prematurely.

“Lighting from the fixtures was inadequate,” said David Franke, assistant director with the Division of Mechanical Maintenance and Operations in the Kentucky Finance and Administration Cabinet. “This created a problem because of the volume of traffic on the square at night—particularly during the summer.”

Since the Old State Capitol is a national historic landmark, the lighting system had to be historically accurate. The Kentucky Division of Historic Properties had a photograph from the 1850s showing a lantern-style luminaire and pole that were used at that time. The goal was to find a luminaire and pole that would match the earlier system as closely as possible.

The lighting system had to have a low uniformity ratio while providing sufficient levels of illumination.

“We did not want a forest of poles or pools of light throughout the grounds,” said Franke. “Since the area includes a number of 50- to 60-foot Pin Oak trees, we wanted luminaires that would provide an element of uplight to illuminate the tree canopy as well as the Capitol building and the general site.

Claremont luminaires from Holophane were installed along the brick walkways and throughout the grounds. The luminaires use a 150-watt clear high-pressure sodium lamp and provide a subtle uplight component to softly accentuate the building façade and the tree canopy.

The fixtures are mounted on 12-foot Princeton poles, which are spaced approximately 40 feet apart. Although the system was designed for one footcandle, the measured light level is 1.2 footcandles maintained.

“The light is soft but ample without generating a stadium-type feel,” said Franke. “We have created a comfortable ambience where people feel at ease anytime they venture onto the grounds after dark.”

Summary
Historically styled lighting systems allow designers to have it all. They can create an environment that is comfortable, safe and attractive. Yet, they gain the advantages of modern technology, including advanced optical systems that control the light, energy efficiency and maintenance ease.

The variety of historically styled luminaires available today enable designers to meet almost any lighting need—and complement nearly any architectural style. The fixtures may be used for a multitude of applications—from residential and city streets, to parking lot, parks and pedestrian walkways—to create a functional, attractive environment. 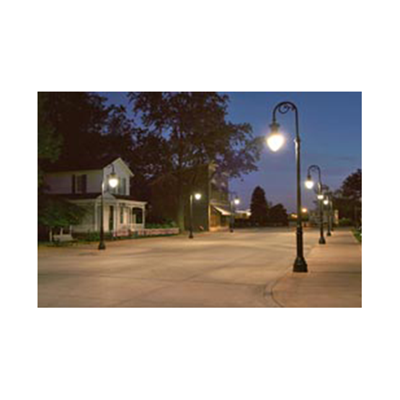